As mentioned in earlier’s post, we had 2 plans, and we decided to go with Plan 1, however, we did not go to amazon cafe as our wonderful laptops did not let us down (contrary to what I believed about Mik’s laptop, it actually has an even better battery than mine, though it is his work laptop).

I came late because I overslept :(

Mik was really feeling the vibe of Fun Toast. Because we came so early, the vortex wasn’t even turned on yet, which is quite cool. When the sunlight hits the rim of the vortex there’s this cool glowing effect on it. 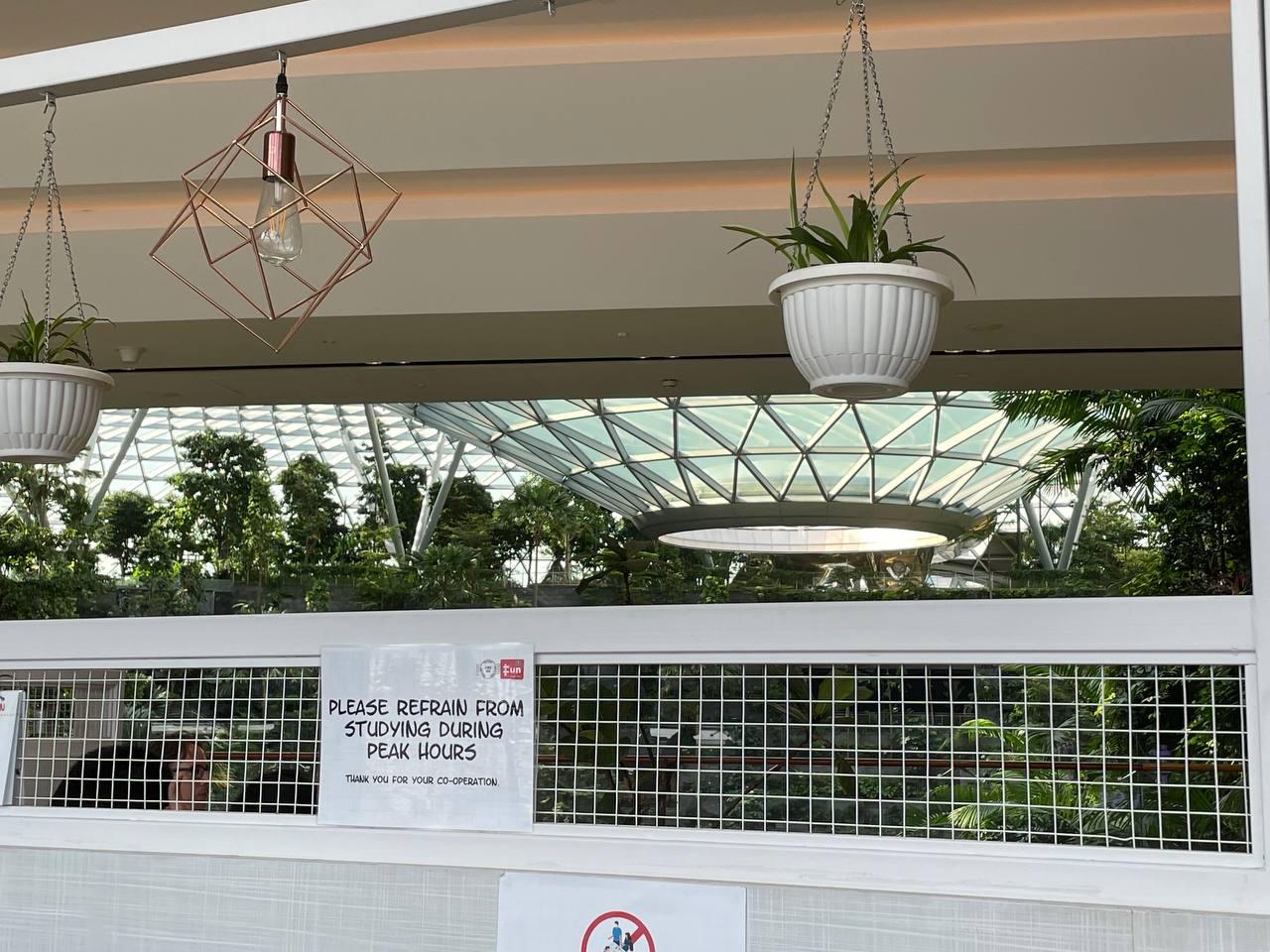 Ignore the sign, it is all bark and no bite.

Overall, the experience was great. We had a gigantic ass window on the left, with full access to the sky as well as the ability to people watch at the T1 drop-off point. At some point, it was raining quite heavily and it was creating waterfalls over the curved window of Jewel, and that shit slapped. Apologies, I have no pictures, however worry not, for this will not be our last trip to fun toast.

On the right, we could see the aforementioned glowing rim. There was a bit of an ugly looking partition, but on the bright side, it served as a bit of a privacy shield.

The ceilings were wonderfully high. Natural light was flooding in from all directions. Absolutely no sense of being closed in despite the fact that we were inside a building, therefore fully taking advantage of Jewel's architectural splendour. The noise levels were consistently at a very inoffensive and undistracting level.

Unfortunately, it was not all roses and sunshine at fun toast. The hard chairs certainly left more to be desired and did a number on my buttocks. This however, was a weakness I was able to live with as my behind is quite ample. I believe that the achilles heel of fun toast is the absence of any power sources for charging of laptops. Were it not for my laptop's splendid showing, I would have packed my bags and left before afternoon's tea.

The Wifi at Jewel

It really seems that the strength of the wifi is correlated to how deep you are in the vortex. Because right now we’re almost at the top and the wifi is like at lightning speeds. 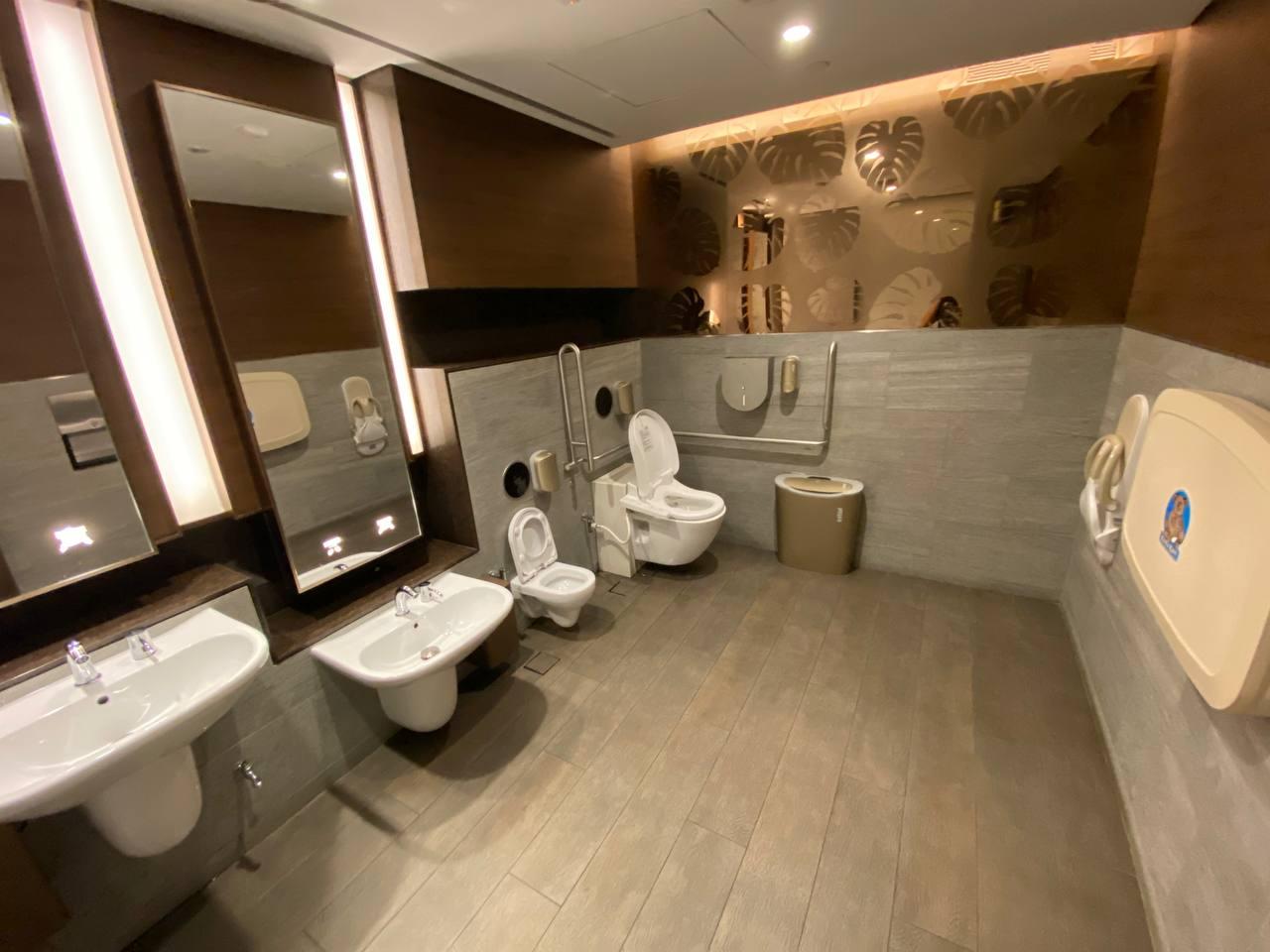 Look at this place man. This is practically the size of my dorm room when I stayed on campus. If you’re a family man, you can take a shit right next to your pride and joy. However, do note that the little one will left in confusion and an uncleaned ass because they have no fancy Japanese bidet or even toilet paper within arm’s reach.

The Coffee and Food 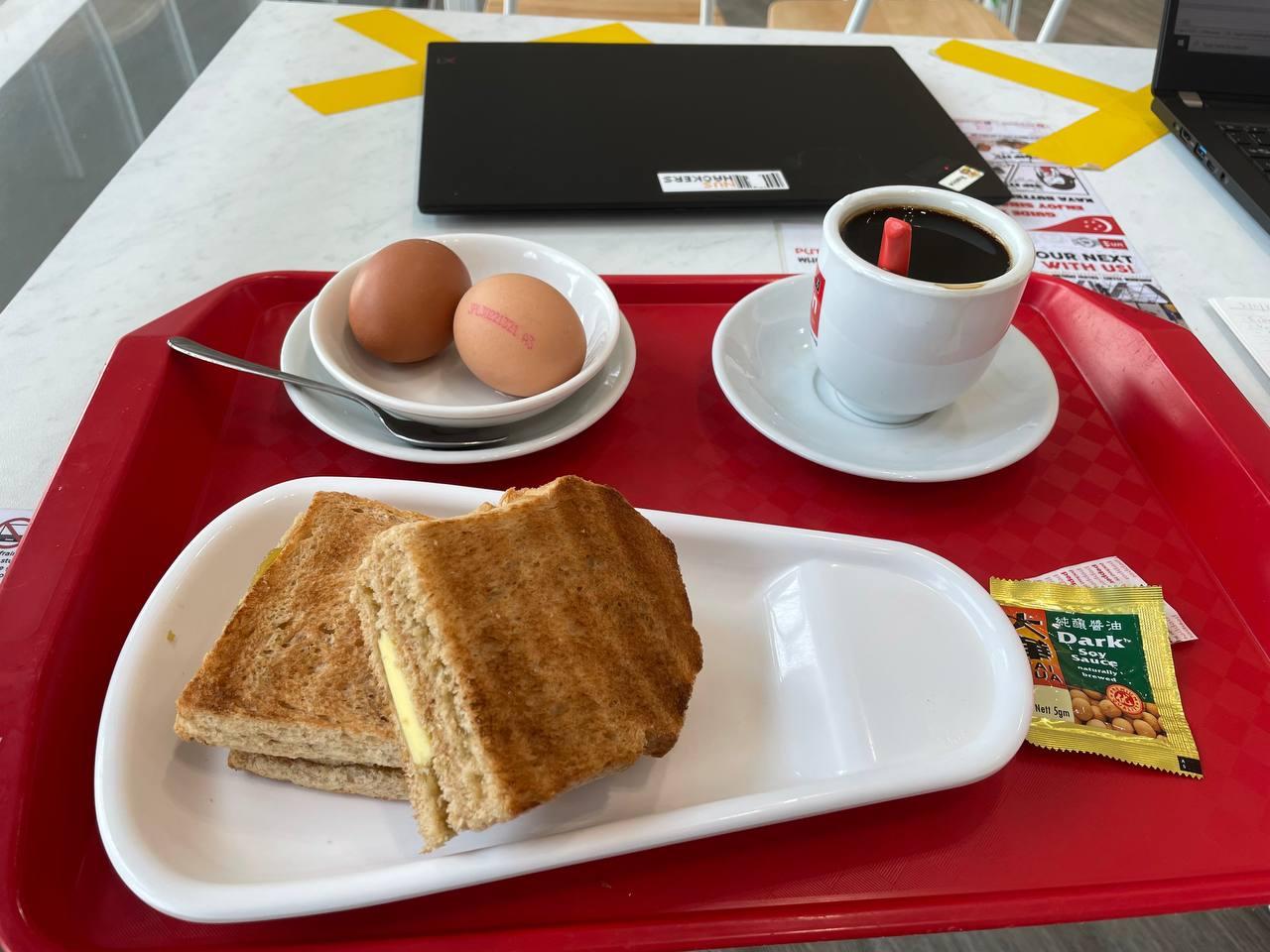 The food is good, prices are overpriced for what they sell but they are still acceptable relative to the rest of the expensive shit at Jewel. Compared to Ya Kun Kaya Toast however, their toast bread was a bit lacklustre. It’s like they finished toasting it and then left it to cool for 10 minutes before buzzing us for collection. The egg was cooked perfectly. There was just the right amount of chunky parts in the egg

Only Mik had lunch. I was so engrossed in improving his resume that he got himself food (and finished it) before I even realised it so I don’t have any pics of him eating today, sorry dear fans. He says he had mee siam and I guess the fact that he finished it before I even looked up means it must have been pretty decent.

Fun toast is something of a tragedy. It has all the qualities we could want at a studying spot, save for the PLUGS. However, the vibes here are so good that I would bring my own power generator just to charge my devices. It’s that good fellas.

This feeling, of almost-perfection, is like finding the perfect man/woman/fella, only to realise that they listen to Imagine Dragons unironically.

After studying, Mik and I decided to watch Eternals. The good thing about Jewel is that there is a theatre here, and since it’s a weekday, the movies are at student prices. The theatre is fucking freezing, though. Mik brought a sweater, I didn’t, cause I was wearing a long sleeve shirt, and I was cold as fuck.

The Movie (No Spoilers)

Before the movie, we got snacks to sneak into the cinema, and I got a boost juice (king william chocolate of course for the people who know me) and guess what……. In the middle of the fucking movie, a random guy materialised and CONFISCATED our snacks!!!

How did they know that we were eating outside snacks??? It’s like these cinema staff have night vision goggles or something, seriously. Ok, I get that they’re just doing their job but damn… really took me by surprise as I was really immersed and the guy appeared out of nowhere. He also asked mik for his snacks, mik tried to psycho the guy and pretend he didn’t know what he was talking about but failed. Snacks? Gone.

We decided to go to PINKFISH (mentioned in the previous post as a potential study spot due to the abundance of plugs (which we are using right at this moment to write this post)) because they had a 1-for-1 “poke” bowl promotion.

But guess what?? The 1-for-1 is only for grilled salmon poke bowls. How is that a poke bowl???? 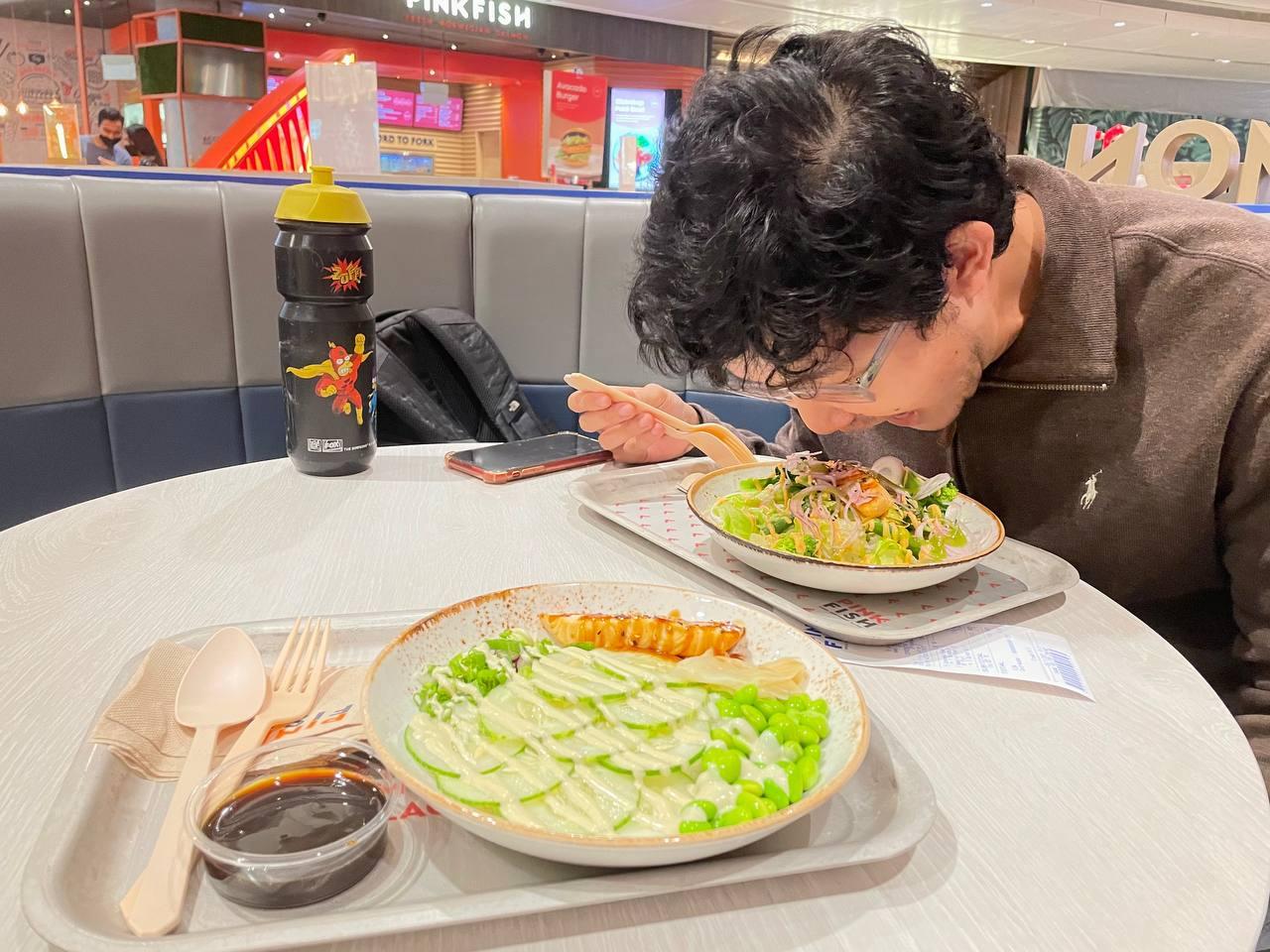 What kind of trailer park fyre festival ass poke is this???

Yeah it was just not good.

Another thing, we have confirmed the hypothesis about the strength of the wifi at jewel being influenced by the elevation. I will be taking this up with the Jewel concierge. For the sake of the tourism industry.

Behind our booth, we saw what appeared to be a magical fish suspended in mid air with no visible tethers and we were just astounded. 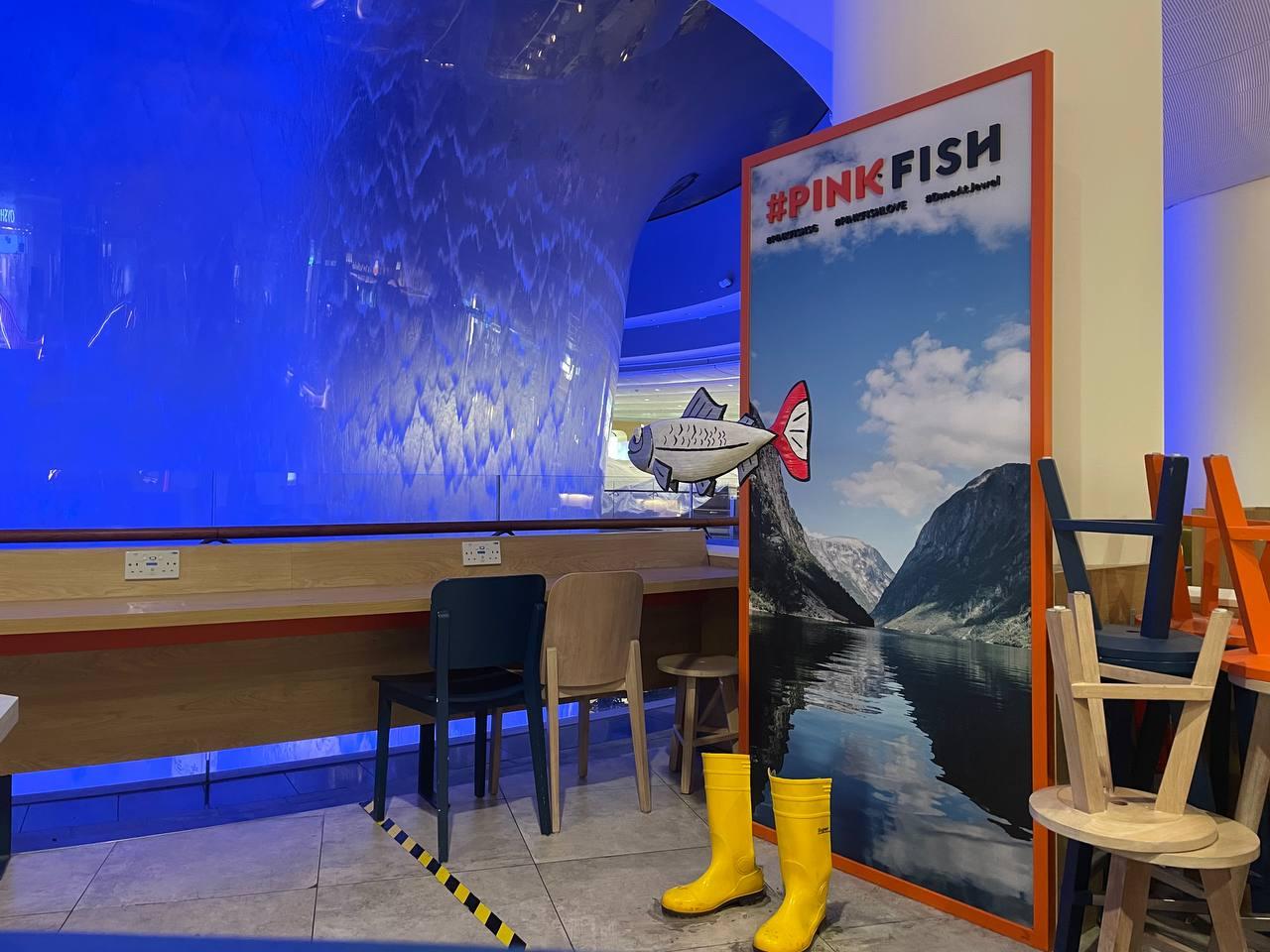 One last thing before we round off this post, I created a telegram channel for updates on posts for this blog! I am proud to say we have amassed 10 subscribers ^__^

Here is the link